Points and Polygons in Tableau 10.2

I have previously written about how we continue to add new features to Tableau and this means that we can develop better solutions to previously difficult problems. I’d like to present another example of this – where we want to plot points and polygons together on a single Tableau map. In an earlier blog post, I had shown how we could present points and polygons together in Tableau. However in Tableau 10.1 and earlier it was a complex process that required significant data preparation.

In Tableau 10.2 we are introducing a spatial file connector that will make it much easier to plot polygons and points together. You can now simply present your  polygon data to Tableau in an ESRI shapefile, KML or MapInfo file format: 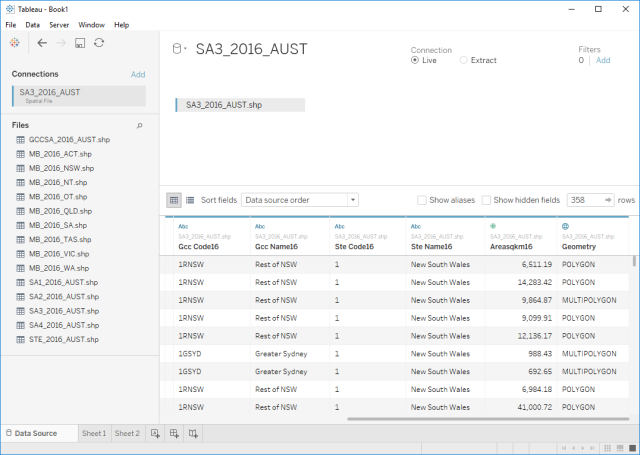 and Tableau can directly plot the polygons: 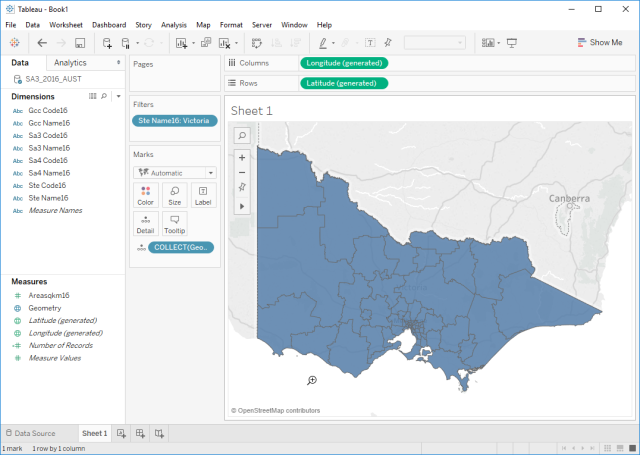 Note that this is a much less complex viz structure than in earlier versions of Tableau. We are not using a vertex list anymore – we simply double-click on the new Geometry object (the globe field in the Measures section) and Tableau takes care of the rest. Note that in the above viz we have the (generated) latitude and longitude fields on the row/column shelves and the COLLECT(Geometry) measure on the details shelf.

When we want to overlay points on this polygon map, we simply need to have our point data also presented in a spatial file format. For this example, I had raw lat/lon data in a CSV and using Alteryx I converted it to a spatial object. I also used some of Alteryx’s spatial matching features to tag each location with the nameof the SA3 region in which it is contained (it will become clear later why this was done): 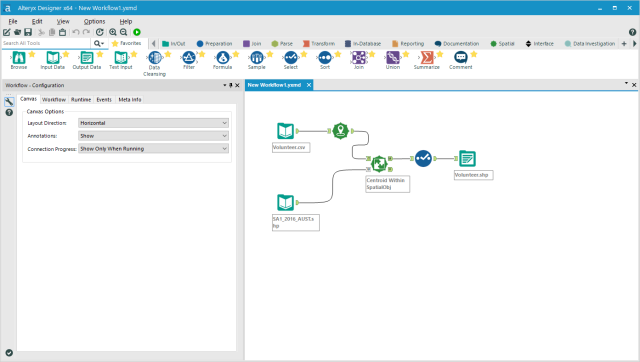 Once again we can simply connect to the resulting shapefile: 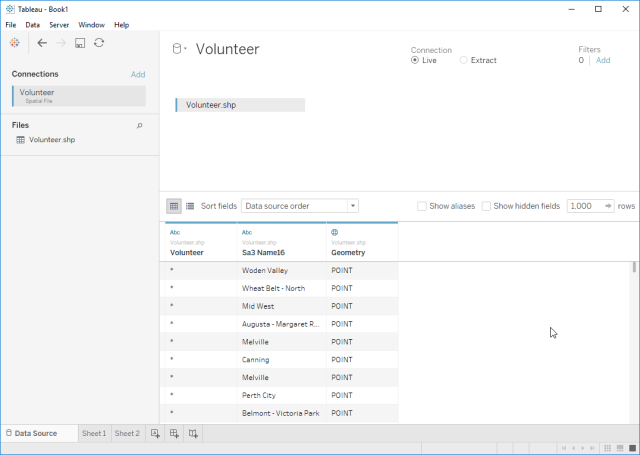 and plot the points on the map – note the layout of the viz is the same as for the polygon map above with the (generated) lat/lon fields and the COLLECT(Geometry) field on details: 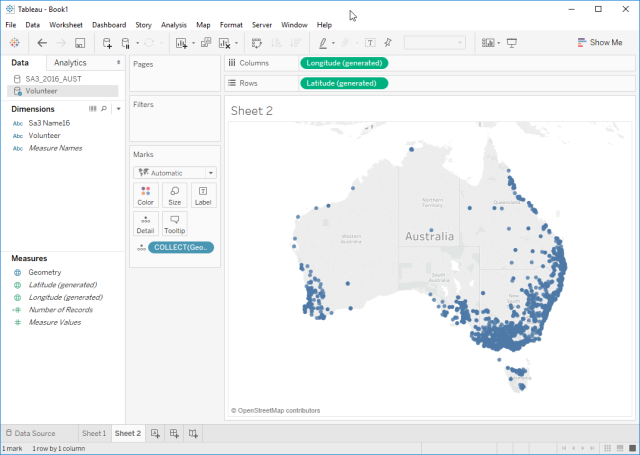 To combine the two spatial data sets we can use the new cross-data-source join feature introduced in Tableau 10 to join the two shapefiles: 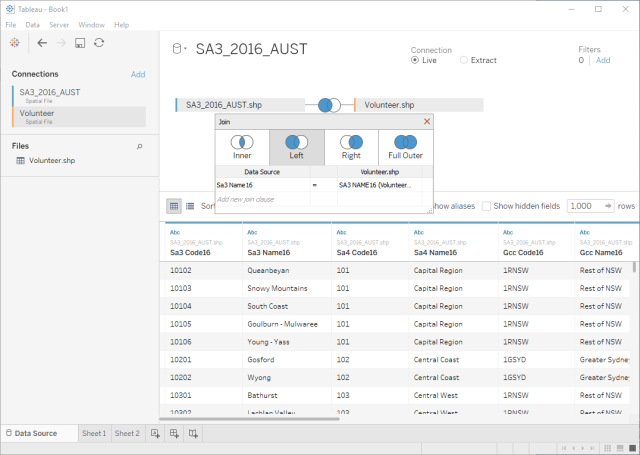 Starting with the previous polygon map, we can CTRL-drag the longitude field on the column shelf to duplicate the map and swap the COLLECT(Geometry) field on the detail shelf of the second map to show the Geometry field from the point location data source. Set the mark type to a red circle and you will see the following: 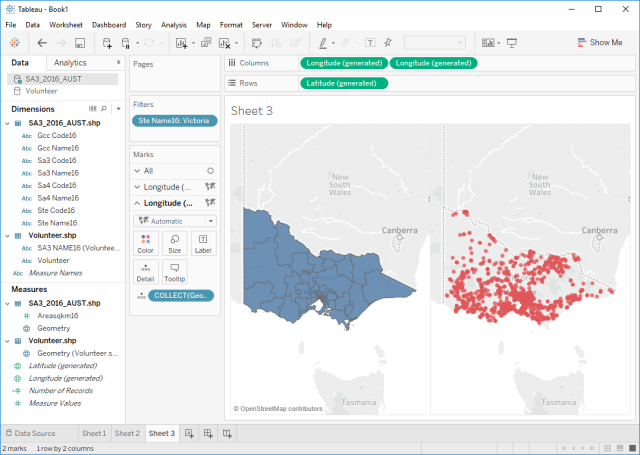 If we make the map a dual axis map, we now have points and polygons shown together. Yay! This is a much simpler (and more useful) solution compared to the previous approach. 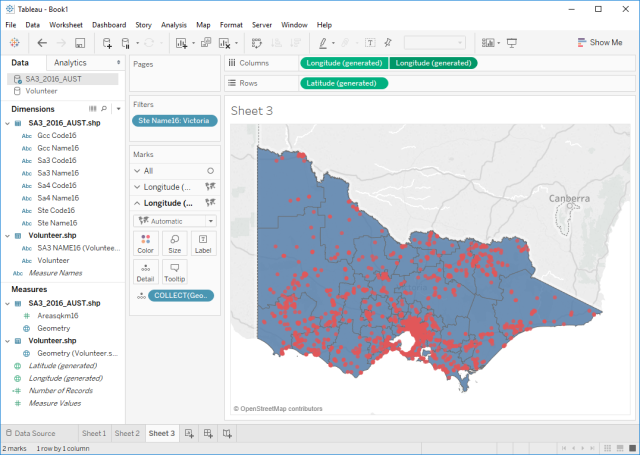 Finally, because both data sets have the SA3 name we can use this to highlight both a polygon and the set of points therein, allowing for interactions that previously were not easy to do: 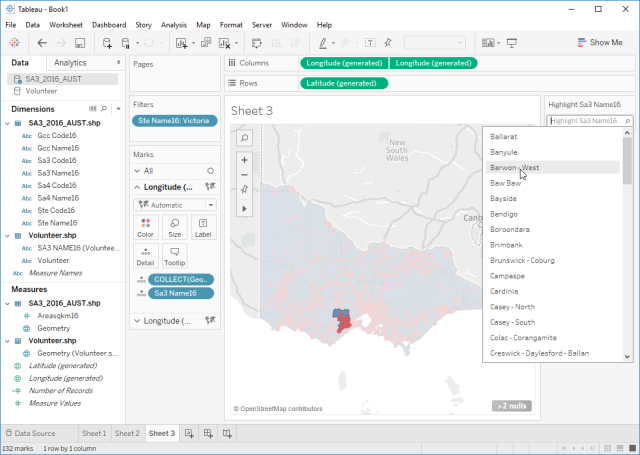 So thanks, Tableau development team, for adding these new capabilities and making old, complex techniques obsolete.

You can download the workbook and data for this example here.

Hi. I'm Alan. By day I manage the APAC sales engineering team for Snowflake Computing. By night, I'm a caped crusader. Or sleeping. Most often it's sleeping.
View all posts by Alan Eldridge →
This entry was posted in Uncategorized. Bookmark the permalink.

24 Responses to Points and Polygons in Tableau 10.2